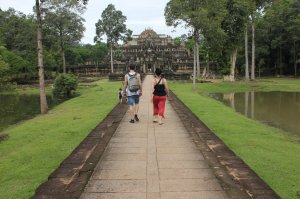 On April 17, 1975 Cambodian communist forces, better known as the Khmer Rouge, seized control of the capital Phnom Penh, and established the state of Democratic Kampuchea. Over two million urban residents of Phnom Penh were evacuated to the countryside and separated into communes to serve Angka. The Cambodian clock was wound back, resetting society at what Pol Pot would proclaim as the ‘Year Zero’. For the next three years, eight months and twenty four days Cambodians would be forced to farm rice, turn upon their family members, abandon their culture and religion and experience torment from the Khmer Rouge regime. During this period an estimated 1.7 to 1.9 million Cambodians died under the Khmer Rouge regime. Many Cambodians welcomed the Vietnamese invasion on January 7, 1979 as it signalled the end to Democratic Kampuchea.

I have a bad habit of getting myself in over my head. And this was no different. No power, running water, toilet or any essential necessity for the future week. Where was I? To tell you the truth I’m still not entirely sure, a remote village in Cambodia called Komphong Phluk, a village on stilts, built around the rise and fall of the water levels of the lake which it neighbours. Quite possibly the first Kiwi to spend nights staying there. 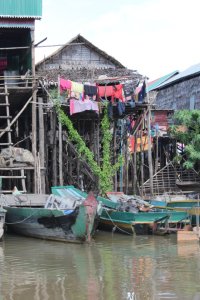 Komphong Phluk, a village on stilts – Photo by Luci 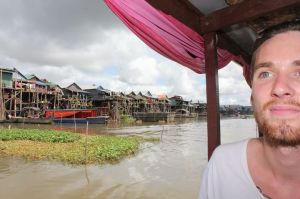 My journey to Cambodia

Travel is one of those things that lends itself to options; entitled travel or destination centered travel, and maybe some spread in between. When I pack a back and land in a foreign country, I want to be at risk, I want to contend with survival and try and mesh with the contextual perils, and achievements as much as a Pakeha (Maori word for white person) can. I feed off the thrill of pace faced, dirty learning, where you have to surrender to the ways and woes of society and just soak it up.Others feel it’s more important to just soak up Vitamin D, or liver damage, or in worse cases…under aged and underpaid sex. So, because language is the fulcrum of culture, I took it upon myself to try to learn as much Khmer as I could. Where this gave me a leg up in the experience, was while I was babbling away with the lovely Veasna who worked over the desk, I got invited back to his village. A privilege and an honour. I was so humbled by Veasna’s genuine desire to share his reality with my wealthy western one. So next thing we checked out of the delightful hostel and rode motorbikes followed by a boat built with an old Toyota engine, working our way out of civilization and into Komphong Phluk.

Where this journey gets important though, is on the deck of Veasna’s family home. Sweltering hot, around an exquisite meal prepared on a charcoal flame, with the family cracking jokes about me because I urinate so frequently. This is my idea of capital gain. The local school teacher was hanging in the hammock, sharing a smoke with me when he informed me the sub chief of the village was going to show up for a feed. A guest of honour?! And I was not disappointed. An older Cambodian man, with leather skin, but a full lock of jet hair and the muscle tone of a teenager approached the ladder and saddled up onto the deck. What I hadn’t noticed in his approach was the remarkable tattoo covering his entire chest; a delicate and detailed Angkhor Wat that, much like his physique, had stood up to years of sunlight and gravity incredibly well.

Naturally we both checked out each other’s tats, finding the first ebb of common ground. I spoke what Khmer I had at my disposal, then, he bounced some English in my direction in reply! This was outlandish from a Khmer gentleman who was generations older! Then the school teacher, who was twiddling the butt, let me in on a little secret: the sub chief spoke French too! Suddenly, the world had emptied itself of restrictions; this incredible old man and I began to speak, tri-lingual, bouncing off of English, then when the source ran dry, to Khmer, and when I couldn’t hold the pace, to French. Bridging not only generation, but blood, geography, and material disparity, this Khmer sub chief of Khompong Phluk and I were thoroughly engaged in conversation. Riveting!

I only had to spoil it by asking “where did you learn French?”

It was interesting that the answer didn’t come from the old man, but the teacher reaching for another smoke…

“The Rouge” he replied.

That answer did need some validating, but the essential truth was laid bare. This man had been not only a soldier in the Khmer Rouge, but someone one of considerable standing. This I knew because Pol Pot had studied in France and valued the French language, so those who were of standing in the army also had to learn the language. This man, with all his amazing attributes and decoration, would have been undoubtedly responsible by command or actual infliction, of other people’s death.

Only a few days prior I had been walking amongst the remains of slaughtered Khmer people in a mass grave commonly known as the killing fields. This place is not an ordinary site of attrition. Because of the amassing of bodies, if you walk through those fields around monsoon, bones make their way to the surface. I had walked over teeth that had worked their way to the top. They even have a bone deposit box, just in case. It is morbid beyond belief. The shear extent of death, I will never understand or be able to process. That place crushed my belief in humanity.

The ‘Killing Fields’, located just outside of the capital Phnom Penh, where thousands of Cambodia’s were brutally murdered by the Khmer Rouge Regime. This is now a tourist ‘attraction’ where you can freely walk over many of the graves – Photo by Luci

The Killing Fields – Sam & I visited after a fresh downpour of monsoon rain. Our guide informed us that during this time of year the rain brings out the clothing, teeth and body parts of those burried just beneath the surface – Photo by Luci

And here on the bamboo rods, helping himself to the meal between us, was a man who had participated and endorsed this kind of maliciousness. I did, and I don’t exaggerate, consider grabbing a utensil and taking it to soft body tissue. But something was a bit in the mouth, something you may also have picked up on… this man with blood on his hands was the second person in a hierarchy of influence over the village: by election and common agreement (the village was quite small) and not by threat of violence – the people of this small fishing village had chosen this man to govern them.

How the hell could these people ever consider a man like this, noble, or trustworthy enough to make decisions on behalf of others?

And while the conversation with this man finished sharply after that exposé, the question of ‘why he was’ stuck to me powerfully.

After asking a lot of questions to a number of Khmer people I encountered on my journey, it turns out the reason this man can be in such a role even after committing crimes against the community is down to the national identity in circular theology. That is; the Cambodian people as a nation are Buddhist. What that means for them, is that the afterlife is not an ends, it cycles through, again and again, and in each rotation of life cycle there are things to be learnt until one ends samsara. Why this means that this man could still be in that role is quite simple. Because the community believes deeply that he will ultimately be held to account for his actions in the next reality, for them, they can let go of the atrocities, and let him participate in society again fully, with all his skills, abilities and what we might call mana (Maori word for pride) still intact.

This ideology initially tore me to pieces. Being rooted in a Judeo-Christian society with a penchant for swift and immediate justice, I couldn’t comprehend how this could be allowed to happen? But then I considered….Cambodia’s scars are well seen on its sleeve. There is carnage from the Khmer Rouge everywhere. But after the tyranny, the reason these people are so resilient and have managed to bring themselves up from ruin is because they were brave enough to embrace this idea, and end the violence, leaving justice to the afterlife. I think in New Zealand, if we were faced with the same horrors, we would demand an end, or at least some severe penalty for those who had committed the crimes. In short, the bloodshed would continue. But because of Cambodia’s incredible take on forgiveness, the blood shed could stop, and as a result, the nation of Cambodia stands as a testament to human resilience. While I still pine for justice, the Cambodian idea of how to move on from something as evil as the Khmer Rouge, has taught me a powerful lesson in what it means to be just. 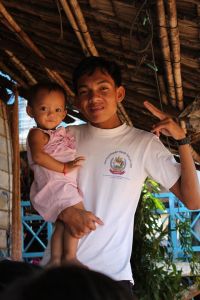 Local children from the village. Although these children have so little, they are never without a smile – Photo by Luci

*Samuel writes from Auckland, New Zealand. He writes poetry, plays the violin and is everything unconventionally “kiwi”. Sam can be contacted at samuel.j.hennessy@gmail.com

*Luci West is a PhD candidate at the School of Government and International Relations, Griffith University, Australia, Brisbane and  executive editor of Alochonaa. Luci’s research areas include transitional justice in South East Asia.

Both authors traveled to Cambodia together.