From Muslin To Museum: The Rise and Fall of Bengal’s Textile Empire-3

This is the final part of Alochonaa’s 3 part series (part 2 accessible here) on the the rise and fall of Bengal’s textile empire. Bengal, once dubbed as the ‘paradise on earth’ was renown for its textile industry and its fabrics enjoyed the prestige of popularity abroad, particularly in Britain. M Ahmedullah contextualizes legendary reputation and decline of the historical Bengal textiles, exclusively for Alochonaa.com
Bengal

Various locations within Bengal developed their own specialisations in the production of textiles. The Dhaka region in present day Bangladesh became famous for its fine muslins, although the area also produced a range of other textiles. In West Bengal the main locations for textile production were Hugli, Kasimbazar and Malda, where they also produced muslins. Most of the fine and luxury quality muslins exported by the East India company to Europe were from the Dhaka region. According to East India Company records they were in their Anglicised names: Addadies, Cossaes, Dimitties, Jamdanees, Mulmuls, Nainsooks, Seerbands, Seerbettes, Shalbafts, Tanjeebs and Terrindams. The table below lists the most frequently exported textiles by the East India Company from different locations within Bengal. 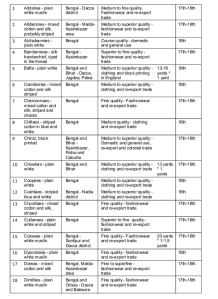 During the Ottoman empire large quantities of Dhaka muslins were exported to Turkey and Persia. Besides the Moghuls in Delhi and Agra, there were other very
important Asian regions for the consumption of the luxurious textiles of Bengal. During Moghul rule muslins were among the top quality Indian textiles consumed by the rulers, their families, noblemen, etc. Moghuls also helped to expand and develop deeper connections between different Indian regions under their rule and beyond to expand trade and increase government revenue.

The arrival of the Europeans injected new demands and creativity within the various textile exporting regions in India, perhaps increasing Bengal’s own production by around 33%, which generated additional economic development and created many local jobs. This percentage is based on Sushil Chaudhury’s calculation of the total share of Bengal textile exports carried out by the Europeans.

“The textile export by Asian merchants can be computed at around Rs 9 million to Rs 10 million a year, while the total exports of Bengal textiles by the Europeans did not exceed Rs 5 or 6 million. While the total value of silk exported by the Asian merchants is estimated at around Rs 5.5 million on an average during the period from 1749 to 1753, and Rs 4.1 million from 1754 to 1758, the average annual value of the European export of silk was only around Rs 0.98 million over the same period. In other words, the Asian share of silk exports from Bengal was 4 to 5 times more than the European share in the pre-Plassey period.” (The Prelude to Empire, Sushil Chaudhury).

The following map, based on a map in ‘The Trading World of Asia and the English East India Company: 1660-1760’ by KN Chaudhuri, shows the Asian trading routes and how the Indian subcontinent was connected with the outside world during the early 18th century. Bengal was connected with many places in India, Asia and Europe, by land and sea, including with the inland trading world of the Great Silk Road, Persia, Ottoman Empire and Arabia.

Decline of trade and technique

During its long history a number of factors, including changing political and dynastic situations, caused the demand and taste for Bengal textiles to vary from time to time. New markets and new geographical locations around the world were added and sometimes lost. For example, during the 16th,17th and 18th centuries Europeans directly shipped Bengal textiles to Europe and elsewhere, although this trade was relatively small during the 16th Century, which was primarily undertaken by the Portuguese. The main destinations for the Portuguese export of Bengal goods, including textiles, were the various ports in Asia, some of which they controlled directly, such as Maleka and Goa, and others like Sumatra, Borneo, Maldives, China and Japan with which they were engaged in trade. On the other hand, after the British took over of Bengal in 1757, the new power in charge slowly squeezed out most of the foreign buyers of Bengal textiles from the region and significantly reduced Bengal’s trading links with the outside world. By the end of the 18th century there were very little direct exports of Bengal textiles by parties other than the British (East India Company and private traders) and their local partners.

Soon after the British conquest of Bengal the East India Company stopped paying for their textile purchases using cash brought in from Britain. Instead they switched to utilising from elements of the revenues they got from Bengal taxes to purchase Bengal textiles. They also made life difficult and near impossible for other countries to trade with Bengal. In effect they cut off or reduced Bengal’s independent trading links with traditional trading partners and monopolised the buying of textiles, imposed conditions and forcibly lowered prices that they paid to weavers for textiles purchased.

“From the final decade of the eighteenth century cloth exports from South Asia had already begun to decline for a variety of reasons, including the monopsony that the English East India Company had built in Bengal and South India, which blocked manybuyers from obtaining cloth.” (Cotton Textile Exports from the Indian Subcontinent, 1680-1780, Prasannan Parthasarathi).

The following table shows what happened to Dhaka cotton trade during the first forty years of British rule after the East India Company’s conquest of Bengal. In 1747, ten years before the Battle of Plassey in 1757, there were about thirteen main destinations for cotton exports, which generated 285,000,000 in Arcot Rupees. Fifty years later in 1797, there were only three types of buyers left and the total value of Dhaka cotton exports reduced to 140,154,500 in Arcot Rupees. This is less than half of what it was fifty years earlier. Evidence suggests that as the East India Company squeezed more out of the weavers, more textiles for less money, through their monopoly and domination of the market, the reduction of the monetary value into half does not mean that the quantify was also reduced proportionately. 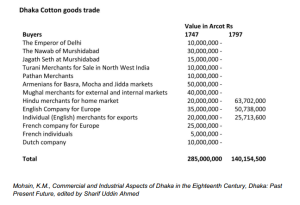 Soon afterward the declining state of Bengal textiles manufacturing experienced another massive shock which ultimately brought the extra ordinary history of the region’s fabric manufacturing to something quite insignificant. This was caused by the industrial revolution that started in England and the East India Company’s flooding of the captured Bengal market with cheaper machine made cotton goods from Britain. The Bengal textile industry then declined rapidly and by around the 1850s there were hardly anything left of its past glory. These factors caused the once famous textiles industry of Bengal to demise, causing the death of the legendary fine muslin textiles. Muslin was Bengal’s finest heritage that made the region famous and attracted visitors and riches to its shores for millennia.

The fine muslin textiles were produced by a special cotton variety, native to region around Dhaka, but now no known trace of that plant exist. What makes the situation even worse is the thought that the cotton plant / tree that produced the soft and strong threads for hand weaving the amazingly fine and beautiful muslin fabrics may have become extinct.

After a long period of decline the situation is now experiencing a slow positive change and there seems to be an increasing interest on the history of Bengal
textiles. This is due to the efforts being made by dedicated individuals and groups involved in research and practical work. These attempts are helping to revive and promote many lost techniques and traditional methods of textile production. They are trying to help make visible the rich history of the once famous textile industry of Bengal. The aim is to achieve wider appreciation of this textile heritage and, through an increase in interest, help bring back its many lost traditions and prevent knowledge and skills currently under threat from disappearing.

Through theoretical and practical efforts the rich history of Bengal textiles is slowly finding its way to the wider consciousness of people around the world, particularly in Bangladesh and West Bengal in India. This trend is set to grow as a result of current interest and also spurred by new discoveries. An example of a chance discovery is the recent unearthing of several publications on costumes. According to Madhumita Bose, ‘two series of volumes… dating back to 1866, titled, Textile Manufactures and Costumes of the People of India’, which are ‘rare volumes of intricate designs and weaving techniques’, were stumbled upon ‘while breaking open a locked cupboard’. The volume was produced by the British who used British locks to shut the cupboard, which is situated at the Industrial section of the Indian Museum in Calcutta. ‘Together, the volumes present nearly 2000 fabric designs, complete with their length, breadth, weight, place and price specifications, as well as detailed archival material on weaving patterns, techniques and processes, with a companion volume on natural dyes. The whole project reflects the British zeal for detailed study’. (Himal Southasian, May 2009).

During the last few decades, especially after the partition of India in 1947 and the creation of Bangladesh in 1971, there has been a growing interest in learning about the history of Bengal textiles and the use of traditional handloom based production. In Bangladesh for example the government, soon after the birth of the country in 1971, set up a Jamdani cluster, in Rupganj, about 20 miles from Dhaka City. This place is situated in Dhemrai in Dhaka District in Bangladesh, one of the historically famous centres of textile production in Bengal. The place is also known as Jamdani Palli (Jamdani village) where the clustering process has brought together a large number of Jamdani weavers at one dedicated place. This allows interactions, cooperation, skills and experience sharing / learning and also where buyers can come to one place to order their Jamdani sarees. The clustering policy has already had some success in helping to develop a thriving community of Jamdani weavers producing traditional style hand woven cotton and cotton/silk mix sarees. They range from very simple to highly intricate and elaborately designed items. Today the village has about 450 units, each of which consists of living quarters and several looms. A family lives in one unit and the total number of looms per unit varies from two to four. This means that in total there are about 1000-1200 handlooms in this particular village. There are other centres of production of traditional textiles throughout Bangladesh and in West Bengal in India.

*M Ahmedullah holds a PhD on the Epistemology and Political Theory from University of Kent, UK. He worked for many years in inner city regeneration programmes in the UK. Between May 2005 and June 2010 he has delivered a unique exhibition on Dhaka City in and around London. He is the secretary of Brick Lane Circle, an organisation based in London that runs academic events to help transform the intellectual landscape of the Bangladeshi community in the UK. His personal website is http://www.culturalparadise.org

** Alochonaa.com is not responsible for any factual mistakes (if any) of this analysis. This analysis further is not necessarily representative of Alochonaa.com’s view. We’re happy to facilitate further evidence-based submissions on Bengal history. Please send us your submission at alochonaa@gmail.com