Canberra, March 15, 2014 (Alochonaa): Like a match box full of sticks —that’s how the Farmgate over bridge was once described to me.  It was the early 1990s, when six or so million people lived in Dhaka, while Bangladesh’s population was around 110 million.  I can’t think of any match box that, once full, can pack in a significant rise in the number of sticks, and yet, Bangladesh has somehow found room for extra people.  In the two decades since my visiting friend saw the teeming multitudes of Farmgate, the country’s population has risen to 150 million, and depending on how one counts, Dhaka is home to 15 or more million people.

The headcount, however, does not quite capture the fact that Bangladesh is going through a demographic transition. A transition that is perhaps as remarkable as, and probably related to the Bangladesh paradox.  As Chart 1 shows, over the past three decades, population growth has slowed significantly and the fertility rate (the number of children each woman bears on average) has declined markably.  Given the fertility rate is already close to the replacement rate of around 2%, it is quite possible that population growth may well slow even further from current 1% a year.

Why has the population growth slowed and the fertility rate declined?  Traditional theories of economic development explain demographic change this way: in poor countries, parents have lots of babies, not knowing how many (or if any) of the children will survive; as countries escape poverty, the odds of kids reaching adulthood rises, and parents gradually start having less babies, and focusing more on improving the health and education of the children; this substitution of children’s quantity for quality in turn accelerates economic development and sets off a virtuous cycle. 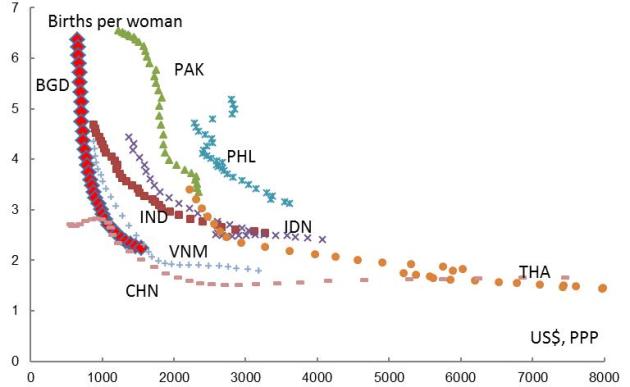 Bangladesh, however, has a fertility-GDP per capita profile that is quite similar to China and Vietnam.  In those countries, strong government actions brought the fertility rate down.  While successive Bangladeshi governments have encouraged family planning, nothing like China’s ‘one child policy’ was ever attempted in Bangladesh (and no one seriously expects Bangladeshi state machinery to enforce something like that even if the government contemplated it). Of course, Bangladesh has also had the NGO sector working hard on social issues such as family planning.  Notwithstanding the NGO and government efforts, there is also another channel through which traditional economic theories of development and demographic change may explain what has been happening in Bangladesh.  Compared with it’s South Asian neighbours, a lot more Bangladeshi women are active in the labour market.  As Chart 3 shows, the female labour force participation rate in Bangladesh is higher than not just India and Pakistan, but also Indonesia and The Philippines —incidentally, China, Vietnam and Thailand have higher female labour force participation rates, as well as fertility rates compared to Bangladesh.

Where do all the Bangladeshi women work?  Ready garments would, of course, be a major employer.  But there are over 25 million economically active women (of over 15 years of age) in Bangladesh, and as big as it is, the RMG (Ready Made Garment) sector is not that big of an employer.  Understanding female workforce participation is not just an interesting academic exercise, there are also important public policy implications, and the public policy issues are not just economic (narrowly defined) in nature, but venture into social policy sphere.  Childcare, family relations, and the politically charged issue of female inheritance rights, all come into play when we start thinking about the ramifications of the demographic transition that Bangladesh has been undergoing.

Public policy, and politics, becomes even more complicated once we realize that Bangladesh is also urbanizing rapidly (Chart 4).  At the time of Partition, only 5% of Bangladeshis lived in towns and cities —again a lower proportion than our neighbours.  By the middle of this century, we are likely to be as much an urban nation as most other Asian countries.  This rapid urbanisation means long established social norms are likely to fray. 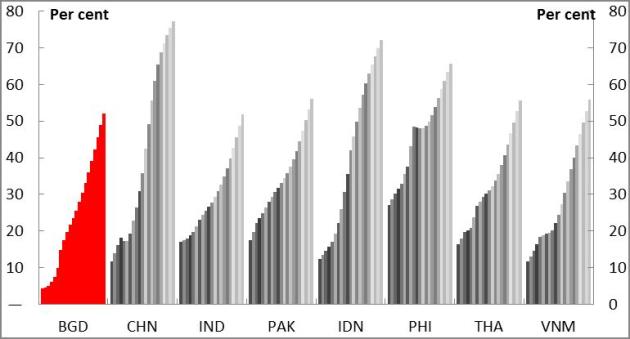 As a result of the demographic change, the median age of Bangladeshis is rising (Chart 5), and the country is in the midst of a ‘youth bulge’.  In 2010, nearly a tenth of the population were (potentially) angry young men — male in their 20s.  This proportion is going to only rise in the coming years.  Imagine 15 million sexually repressed young men with little prospect in life.  That could be tomorrow’s urban Bangladesh.

The demographic structure of Bangladesh is similar to that of many Arab countries.  Many European countries experienced a similar transition in the late 19th century or the first half of the 20th century, and many East Asian countries went through this in the past 50 years. There is a strong correlation between the youth bulge and major social upheavals — wars and revolutions, but also rapid economic progress.

Why should Bangladesh be an exception?

The striking feature about Bangladesh  seems to me is not that it is potentially volatile, but that it’s actually so very stable.  Yes, you read that right.  Stable. When all is said and done about the sound and fury of 2013, is Bangladesh of 2014 all that different from that of 2012?

Don’t get me wrong. I don’t want millions of young people burn down the country in the name of some revolution, but it’s striking that they are not out there.

Or maybe they are just about to get there.  Maybe we are on the cusp of something big.  And if we can navigate that ‘big thing’ successfully, we should be able to reap the demographic dividend by 2030, when the population structure will be very conducive for a productive and prosperous society.