Tension has been escalating between Israel and the Gaza Strip following the murders of three Israeli teens in the occupied West Bank and a Palestinian teenager in Jerusalem over the last two weeks. The state of Israel has since launched operation ‘Protective Edge’ against the Gaza Strip. Palestinian fighters have responded with rocket attacks against Israeli cities. This is the ‘Gaza War Diary – Day Three’, a personal account from Rasha writing from Gaza as the violence unfolds. Gaza War Diary ‘Day One‘, ‘Day Two‘, ‘Day Three’, ‘Day Four‘, ‘Day Five‘, ‘Day Six & Seven‘, ‘Fasting Under Fire‘, ‘Staying Alive‘ are also available to read.

Gaza, July 27, 2014 (Alochonaa): I have not been able to write my diaries for the last few days. My home is Gaza has largely been without electricity over the past few days. On the day I wrote this, the power came back on after 38hours but only remained on for four hours. From where do I start? Perhaps the UNRWA school that was targeted in Beit Hanoun? The school was made into a shelter house for more than 1500 displaced people who were evacuated from the border area that had undergone heavy shelling by Israeli forces. These people again were told to evacuate the school that they shelter within. Yet, when they were gathering in the school yard, they were showered with Israeli artillery shells, resulting in the death of 15 people and many more injured.

Or should I tell you about the assault of Khuza’a that has been taking place since last night. Tens of families trapped under shelling and fire in Khuzaa’a and ambulances haven’t reached the injured until so many hours later that many of them died. Given the situation the ICRS has not been able to coordinate the ambulances quick enough, and every time they tried to enter the bombed area they were shelled by artillery. What has been rather absent from the media is reports on Israeli forces arresting hundreds of youth and men from the East of Khanyonis and taking them to unknown locations inside of Israel. Some of these people were wounded. 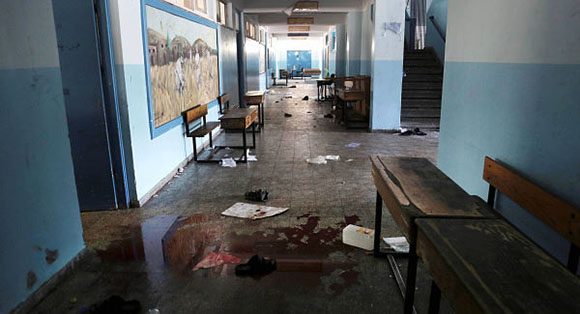 Or would you like to hear about the continuous Shelling in Shiaja’ya in the East of Gaza City and more bodies being found? Or maybe I should start from the posts and calls about missing family members and children. One family found out about the death of their son from the news when they saw the raw video of Israelis directly shooting him when he was trying to save another injured person in Shiaja’ya. Or should I tell you about the paramedics who went to save people to then find their whole families murdered? Or should I tell you about the direct targeting on hospitals and mosques inside Gaza? The Israeli forces destroyed al Aqsa, Balsam and al Wafa hospitals and dozens of mosques .

Words alone fail me in being able to tell you what is happening in Gaza. The words become meaningless within the context of all the injustice and oppression the people of Gaza experience every second of the day. For the last few days the bombs have been dropping from the sky in such an uncontrolled manner. The other night I felt afraid when I felt the shells were getting closer, until one huge explosion pierced the air and made my heart stop beating. I found out it was an air strike on a residential building which is next to another large residential building. The pictures were shocking. These buildings contained large numbers of apartments with each one housing many families.

Many Palestinians sought shelter in UN schools. This photo depicts a Palestinian family breaking their fast while they shelter from Israeli shelling – Google Images

It was during Iftar, the time when we break our fast during the month of Ramadan. A family of 7, including parents and five children were immediately killed and so many other injured. This family fled the Shiaja’ya massacre to their relatives house in central of Gaza city thinking they would be safer. Since the start of this offensive, around 24 families have been killed, this includes all their family members – an entire family unit destroyed by Israeli forces. As I wrote this the death toll was at 800, but as this post goes to publication the death toll now stands at 1,052 and more than 6000 Palestinians have been injured. One Israeli soldier was captured by the resistance and Israel announced the death of 30 Israeli soldiers. The Palestinian resistance have stated that the death toll of Israeli soldiers is actually much higher than this. With every death of an Israeli soldier Israel responds harder and their shelling intensifies.

In day fifteen of this war the Israeli airplanes targeted a house a few blocks away from mine. They dropped several F16 missiles. That was the most horrifying ever. We felt the house shake, then heard the glass shatter and the building debris flew into our balcony and the inside of our home. The same target was hit again only a few hours later. Our bodies continued to shake and our ears ache. On the radio they mistakenly released the news that the targeted house was ours. Our relatives and friends showered us with calls and messages to make sure that we were all okay. The idea of having our house destroyed, or the loss of a family member continues to haunt me. 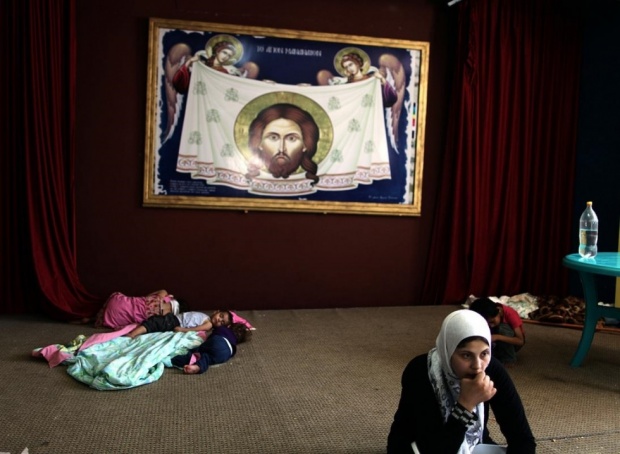 What gave me strength was the call from my friend who got out of Shiaja’ya alive. She told me how she and her family had escaped death while having artillery raining on them with shells every 3 seconds. They walked more that a kilometre to reach a car to take them to another safer place. She described it to me as if it were a scene from the end of the world movies. You know those moments when people run and shelling continues to drop over heads, you see it hit those in front of you, and those behind, but you must keep running in order to survive. f you think for a second to go back to check on someone, you will be dead for sure. She told me that what doesn’t kill us makes us stronger. So I must remain strong, I must continue to write my diaries despite at times being filled with despair. I must continue to let the world know what is happening in Gaza.

Can you imagine what kind of future is ahead for all of these people who are still alive in Gaza? These shocks and complexities we have been facing in Gaza continue to accumulate. Before this war Gaza has been under eight years of a strict siege that affects all aspects of our lives. During this period Israel conducted three major offensives that destroyed the infrastructure of the society over and over again. Whenever we tried to restore a bit of ourselves, they came and destroyed us again. Unemployment in Gaza is close to 50% from labour power, 47% of the population are under the age of eighteen and 39% live in a state of poverty. All these are highly critical indicators of the deteriorated economic and social situation in the Gaza Strip. Gaza is an unpredictable and an uncertain place. People are struggling to plan for their future. Because it can all be altered within a day or a night.

What does the future hold for Gaza? This photo shows Palestinians sheltering a in UN school – but nowhere is safe – Google Images

The Gaza Strip has almost a zero illiteracy rate. The Gaza people show high educational and intellectual qualifications and potential both inside and outside Gaza. Those who create the most and are the most motivated are the ones who have the greatest will to utilise their mind. All they need are the resources to invest in their capacities. But the Israeli’s are trying to destroy these resources and leave us with nothing. But they will not do as they have done in the past. Gaza will resist.

The future of Gaza is full of obstacles and difficulties. For all the families who lost members. For the persons who got injured or wounded. For the people who lost their houses. For the youth who have been struggling to find ways to build their lives and to develop their careers, and to establish families. For the children who are traumatized by all this blood, a lot of these children require immediate action and they will suffer for a long time from this. 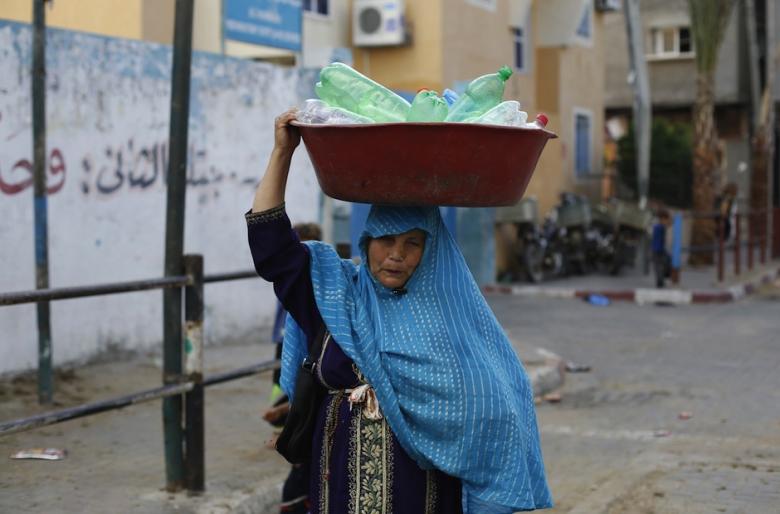 The future of Gaza is dependent on how this war is going to end. The Palestinian demands to end this offensive include lifting the siege, freedom of movement for people, opening the crossings for goods and exportation and importation movement, and to find a solution for the energy and power crises. If this war ends up with honouring these demands, then Gaza will start to gradually restore its strength after all these long years of siege, wars and suffering. However, if it ends with the same conditions that we have been suffering from before, then it will prolong our agony and eventually lead us to a complete catastrophe .

For the last few days I have been following the news, speeches, and press conferences of Ban Ki Moon, Netanyahu, President Abbas, the Hamas leader Mishaal, and others. It have been exhausting to listen to all of them, as they leave us with no clue as to where they will take the Palestinians next. They just make me hate politics more and more. I have no answers to give to my nephews questions when they ask me if they are going to die next? Or, if we don’t die in this war what are we going to do next in our life? I have no idea when these thunderous explosions and rains of shells are going to end. All I know is that the UN, the Arab states, the world and all of humanity have failed the people of Gaza.