On 25 May 2009, Cyclone Aila ravaged areas of southern Bangladesh as well as eastern India, affecting 3 million people. Eighteen months later, the district of Koyra is still unrecognizable. The storm surges that followed covered the land in saline water, devastating the lives and farms of those who live there. The destruction is everywhere – wilted palm trees dot the landscape in an isolated, irregular pattern, in a place more water than land. Everywhere you look is grey mud, dried and cracked from the salt in the sea, including the foundations of Bish Patni’s house.

Every morning, Bish wakes up at 5.30 a.m. to spend the hours before breakfast applying a mixture of cow dung, ash and mud to the three-foot base that will keep her home above the water come rainy season. Without this daily top up, her house will collapse. After seeing her husband off to work and children off to school, she spends the entire day fishing for wild shrimp and other fish, which penetrated their area along with the sea when Cyclone Aila destroyed the embankments. She works non-stop for six hours, without any food. There is simply not enough for lunch. She has to wait for dinner. She and her family depend entirely on the government for rice, their staple food. They receive twenty kilograms for the entire month. “It is nowhere near enough, but what can we do?” she tells me. “After Aila, this is our fate.”

The only work available for the women in Koyra comes from the government. This year, a hundred days of paid work have been provided for the poorest people, at 150TK (around US$2) a day. For every village, the locally elected political leader had to draw up a list of the poorest five people in their community who could work. When the government grant for wages came through, the number was cut down to two. In Bish’s village, twenty-two applied for the job.

With their farmland destroyed by the salty water, Bish’s husband, like so many others, including those of her childhood friends, Bashmonti and Champa, has had to go to the city to find work. He regularly has to leave for fifteen or twenty days at a time. There is neither the time nor the money to make the trip every day. She says the best part of her life these days is when she can hug her husband, for the short time he’s home. For Bashmonti, she most enjoys it when her eleven-year-old son hugs her and sits on her lap. She also has two daughters, grown up and married. “Sometimes, I wake up in the middle of night, and think of my children. I get sad that they’re all grown up, and have left.”

But their children bring them a lot of pain, too. With their husbands gone so regularly, for so long, these women often have the sole responsibility of keeping the family afloat. The huge pressure is often unintentionally taken out on their children. “I get so lonely,” says Bish, “that sometimes I snap at my children, and slap them. They go to school, shocked and scared, and cannot concentrate on learning. When they come home, I can see they haven’t learnt anything, that they were confused and frightened, and that it is my fault. Then I cry.”

The lives of Koyra’s women are racked with uncertainty. Their list of fears is endless: drinking water is scarce, and becoming scarcer; there is a permanent shortage of food, with the next meal never a sure thing; and, critically, cyclone warnings are becoming more and more frequent, eating away at their nerves. Since Aila, there have been two major warnings – two near misses.

“Everyone who had relatives outside of Koyra left after Aila. But we cannot leave. Where will we go?” They long for the days of their childhood when the three of them would play the “fox hole game”: they’d toss a dash of chilli powder on the end of a few lengths of straw, lay it on one end of a fox hole, set it on fire, then chase the fox as it ran out the other end, its nose burning from the chilli. “We’d chase it right up until it crossed the wetlands!” laughs Bish. They wish they could relive the simple pleasure of that game, those carefree days. They seem a lifetime away. “We never experience joy like that anymore” says Champa. “There is so little joy in our lives now.”

The biggest change since their childhood days is the loss of their freedom to use public resources. “Once, we would walk around the forest, picking bananas and mangos at will. It belonged to everyone, we all enjoyed it together.” However, as climate change took effect and sea levels rose, the land became more and more saline, day-by-day, until the forest was gone. Now, what little resources are left are owned privately or by the government. Access is limited. The last real joy left in their lives is the Puja, the Hindu festival. Before Aila, they would sit under the trees, drinking local rice-wine and dancing with each other. They point out the spot where the trees used to be. There is nothing but mud, dried up, cracked and grey. 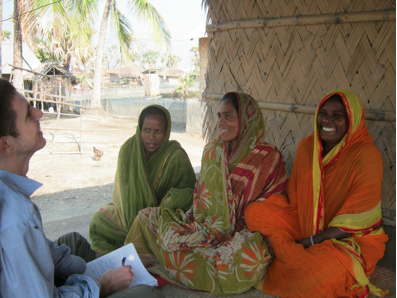 As with Majherait, the village of Shatgharia is surrounded by dried, cracked mud, as far as the eye can see. Because the land has become saline after Cyclones Aila and Cidr (which hit southern Bangladesh in 2007), nothing can grow here. It is hard to imagine that this land was once bursting with life, nature and colour. The only colour now, apart from the rainbow of saris, is the grey of scorched salty mud.

“When Aila struck,” says Minati, “we had to spend the next eighteen months living on our beds, raised off the ground and above the water by six levels of bricks. We made an oven out of brick and corrugated iron. We ate once a day.” Her friend, Anima, recalls when “Two months ago, my child was crying for food. But it was high tide –I couldn’t leave him, for he might fall off and drown in the sea around our bed. It would not be low tide for another few hours. It was terrible.”

Minati and Anima are just two of thousands of women living in the southern district of Khulna, whose lives were destroyed by Cyclone Aila. It was only a couple of months ago, a year and a half after the cyclone hit Bangladesh’s coast, that the embankments were repaired sufficiently for the sea water to drain out. “Before Aila,” Minati continues, “we grew vegetables in our homesteads, we grew mango trees, jackfruit trees, all kinds of life. Now, the land is inundated by salt and the trees are dead.”

Now the majority of women in this region have to make a living by selling the fish they catch in their area, which penetrated the region when Aila struck. Fishing is their sole source of income, while their husbands go out and look for whatever work they can find in the city, but it is nowhere near enough to sustain their family – when the government supply of rice runs out each month, they have to buy more. One kilogram of rice costs 25TK (US$0.30), but a family of 4 needs at least two kilograms every day to sustain them. They can only sell their catch for around 30TK a day, a shortfall of 20TK, even if they spend all their income on rice.

And yet, in the market, they see the fish they caught selling at 120TK per kilogram. The reason behind this disparity is the “Aratdar.” These are middlemen who buy the fish from these women at low prices, then sell it at 150% the price they bought it for. “We have neither the time nor the money to sell the fish ourselves” says Minati. “We have no choice but to sell it to the Aratdar, and they know this. We cannot bargain – we must sell as quickly as possible, in order to get back to our homes and continue our work.”

Sonatola lies near the city of Barguna. Its close proximity to the district’s largest town, and the fact that the women there possess their own land, has drawn the attention of local non-governmental organisation (NGOs), who have helped to greatly improve the quality of life for these women and their families.

Every morning, Fatima wakes up at 5 a.m. to prepare breakfast for her husband and children, aged twelve and seven. She manages to put in several hours of work on her farmland until the family must be fed their pre-prepared meal at 10 a.m.. On stomachs holding wet white rice and little else, her children go to school, her husband goes to the city on his rickshaw, and she goes back out to the field, where she works until she has to prepare lunch. Once everyone has eaten, she gets a half-hour rest until she leaves for the field again, where she works until dusk. Often, she uses her evenings to prepare the food for market. “There is a lot of pressure on my time,” she says. “There is no time for leisure or enjoyment, I must work. I wish I could spend more time with my family, but I must work. I am very grateful that I have land. It gives me a role to play. This is the best job a woman in rural Bangladesh can do,” The other women in the group fervently agree: “It is our most valuable asset. We cannot let it go to waste.”

Fatima is strong, keen and self-confident. She knows she is the largest earner in their family – her husband earns little on his rickshaw – and this gives her power, and a clear and commanding voice in the house. She is relishing the opportunity to work on her own land.

She attributes a lot of her newfound strength to the work of NGOs in her neighbourhood. “They were very, very useful in improving our lives,” says Fatima. Several organisations have led training programmes in agriculture, as well as women’s empowerment programmes in the region. The latter showed the women of Sonatola that they did not have to accept domestic violence – it could and should be reported to the Chairman of the local council. “Now, I am not scared to shout at a man who tries to steal from my farms. I will tell him to go away!” she says.

Access to credit for women has also massively improved their opportunities. Out of the 50 decimals of land that Fatima works, 80% of it is borrowed. It has given her an invaluable opportunity to improve her lot, and she is now “ambitious to expand my business.” All these factors – land, access to credit, women’s empowerment sessions, training in agriculture – have greatly strengthened and emboldened the lives of these women, including their voice in the home and in the community. Their futures look brighter than that of many other women living on Bangladesh’s south coast. 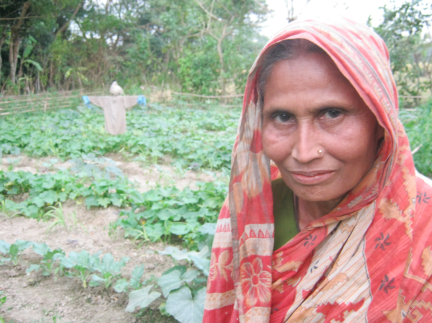 Fatima and her plot of farmland (Author’s image).

*Finlay Green recently graduated from the University of Sheffield with a First Class Bachelor of Arts degree in Economic and Politics. This fall he will begin a Master of Science in Social Policy Research at the London School of Economics. In 2010, prior to his time at Sheffield, he spent three months as an intern at the Dhaka office of Oxfam GB in Bangladesh.