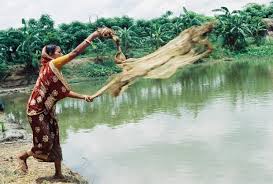 Living On the Edge: Women and Climate Change in Bangladesh Part 1

This is the first instalment of a three-part report on the state of women in agriculture on Bangladesh’s southern coast in November/December 2010. In Part 1, Finlay covers the first village he encountered, Chakbara, where Bangladeshi woman, Monowara, describes life as a tiger widow.

The Impact of Islamic Schools in Bangladeshi Society: The Case of Madrassa

Nusaybah Yusuf in this concluding part of Alochonaa’s Madrassa series, explains how Islamic schools in Bangladesh have contributed to the increased access in education and added value to student lives in a context public spending for education is low and poverty is widespread.

M Ahmedullah discusses the fate of the indigenous people native to the Chittagong Hill Tracts of Bangladesh. Through an ethnographic observation of the cultural festivals symbolic to these ethnic minorities present in Bangladesh. The author emphasises the importance of these festivals in strengthening the cultural identity and capacity of these groups, as they face increasing marginalisation from the dominant Bengali ethnic group. Since the formation of the Bangladesh state in 1971, Bengali settlers have gradually asserted their cultural identity in the region, as a political tool to reinforce the dominant cultural narrative of Bengali people.

Climate Change – Not A Gender-Neutral Phenomenon

From Muslin To Museum: The Rise and Fall of Bengal’s Textile Empire-3

M Ahmedullah, PhD presents the final piece of a three part series on the rise and fall of Bengal’s textile empire. Bengal, once dubbed as the ‘paradise on earth’ was renown for its textile industry and its fabrics enjoyed the prestige of popularity abroad, particularly in Britain. M Ahmedullah contextualizes legendary reputation and decline of the historical Bengal textiles, exclusively for Alochonaa.com.

Md. Khalid Hossain, a Bangladeshi PhD researcher at the RMIT University, Melbourne explains the paradox of perception between the reality, and the political rhetoric of climate change in Bangladesh.