The World Will be Very Religious in 2050

Brian J. Grim, president of the Religious Freedom & Business Foundation, argues that : “reports of the death of organized religion have been exaggerated. According to recent research, the growth of religious populations worldwide is projected to be 23 times larger than the growth of the unreligious between 2010 and 2050.”

Religious Liberty Is Not Freedom from Ridicule

When we work for religious liberty, we are working in the interest of the common good; we are not just protecting ourselves. We are working to keep ourselves from participating in the evil of a conscience-restricting coercive government. The apostles denied the authority of a decidedly non-democratic authority to intrude into such matters (Acts 4:19-20), much less should we expect it of a government with constitutional guarantees of the natural rights of religious freedom.

The Interface between Religion and Politics 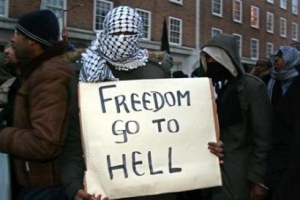 Violent Extremism and the Value of Interfaith Dialogue

What are the factors and conditions that attract religious adherents to radical causes? Dr Brian Adams analyses the role and policy conditions of interfaith dialogue in assuaging intercultural and religious conflict. Read more…

Sources of Conflict in the Xinjiang Uyghur Autonomous Region

Separatist activity in Xinjiang Uyghur Autonomous Region has created a divide between east and west. Chinese central policies intended to provide for cultural and ethnic equality, cohesion and stability can be seen as the root cause for this division and angst common among Uyghurs. Is there an end to the conflict and sparatist extremism, or will it continue for years to come?

‘Respect’ for religion is often simply tyranny backed by violence

Despite a rather bloody history, violence, radicalism and intolerance historically affiliated with religion is still present in the 21st Century. But, can religion be blamed for the violence, or is something deeper afoot. Today’s post (thanks to Jeremy Fox at openDemocracy﻿) gives a succinct overview of the historical development and doctrinal base of religious violence and how we might come to judge it from our own world-view.