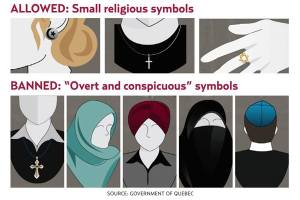 Zerin Nusrat critically examines the proposed bill “Quebec Charter of Values” introduced by the governing Parti Québécois (PQ) in Quebec, Canada. If the bill is passed, it would “prohibit public sector employees from wearing or displaying conspicuous religious symbols.” This will create disadvantage for hijab wearing Muslim women living in Quebec. Nusrat argues that this proposed bill is a manifestation of Islamophobia. She further criticises ‘patriarchal feminists’ including the superstar Celine Dion who supports the bill to liberate Muslim women from male patriarchy from a wrong assumption that Muslim women in Quebec have no agency in wearing Hijab.