Melbourne,November 21, 2014 (Alochonaa):  On July 31,2013  a shocking incident took place at New Delhi’s Jawaharlal Nehru University (JNU), one of South Asia’s top universities. In a dastardly attempted murder, shortly before noon, Akash Kumar, 23, and a student of Korean studies, entered the classroom where Roshni, 22, and one of his classmates, was present. He asked for an audience with her, which she refused. A heated argument ensued. Thereupon Akash took out an axe from his bag and hacked her head. In one account, he also stabbed her in her stomach with a knife. Instantly Roshni lay in a pool of blood on the ground.

Thinking that she was dead, Akash took out an unlicensed country-made pistol, placed it near his temple and pulled the trigger. It did not work. He then ate poison (sulphas) and slit his own throat with the knife. Both Akash and Roshni were taken to hospitals. Akash died soon after. Roshni is battling for her life in the hospital.

This entire episode, like a scene from a horror film, took place inside the classroom with five to ten students present. Students sought to intervene but Akash threatened them with his pistol. According to the initial police reports, the key reason behind the attempted murder and suicide was one-sided love. In one account, they had known each other for two years and after their initial meetings they “became friends immediately“. However, Akash felt that she would not be loyal to him. Other accounts say that he had proposed to her and she had turned it down. According to Roshni’s brother, she never had a relationship with Akash, but he was adamant on having one.

These details of Roshni’s attempted murder by Akash and the subsequent suicide by the latter, gathered from various media reports, are not always mutually consistent and entirely accurate. A clearer picture will likely emerge soon. However, what is certain is that it sent a shock wave through the JNU campus and across the country.

Clearly, this incident was not the first. In the past decade or so many other cases were reported. In 2011, a boy beheaded a 17-year old girl on the campus of St. Xavier College in Ranchi, capital of Jharkhand state. After killing her, the boy attempted to kill himself but couldn’t because he was overpowered by students present there. The incident took place outside the classroom. This too was a case of one-sided love. A similar incident happened in Orissa, a few days before the JNU incident.

As The Times of India noted, many Indians often associate such an incident of campus killing with the US. So what does the attempted murder of Roshni and Akash’s suicide signify? Is India becoming like America? Is this disturbing incident symbolic of a major change within the Indian society? The answer, worryingly, is almost yes.

As I read various media reports of this incident scenes of many Bollywood films flashed in my mind. For a while I was unsure if I was reading a report on a ‘real’ incident or a transcript of virtual scene from a film. After all, is there a strict wall of separation between what is real and what is reel? The age-old adage that literature and film mirror society don’t seem to hold much water any longer. Rather, in many ways it seems the other way round: society mirrors art and film to the extent that the neat distinction between the two appears like a fiction as real as the film itself. 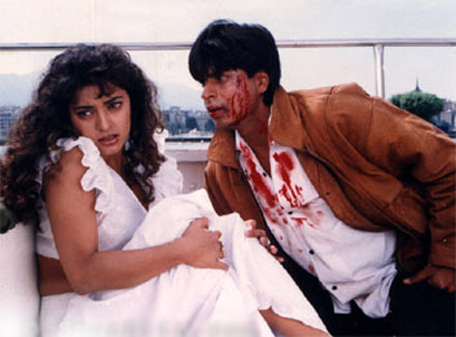 A scene from the film Darr( fear)- Google Image

Akash did not murder Roshni in 2013. He had already murdered her in 1993 the day film Darr (Fear) was released and subsequently it achieved massive popularity and acceptability from the Indian audience (not just in cities but also in small towns). It was an instant super-hit. This movie was a turning point in Bollywood because perhaps for the first time the villain, Rahul Mehra, played by the then emerging Shahrukh Khan, became such a matchless, demotic hero, and paradoxically the hero, Sunil Malhotra (played by Sunny Deol), went almost unnoticed.

Darr was about love with three key characters. Sunil, a naval commando, is in love with Kiran Awasthi (played by Juhi Chawla). However, Rahul is also madly in love with Kiran. Kiran has no love for Rahul. She is committed to and in love with Sunil. Rahul’s obsession with Kiran knows no bound. Not only he continually fantasises and follows her everywhere, he is ready to eliminate anyone who might come between him and his love. In once scene Rahul kills Sunil with two consecutive blows of a knife to say: “I am sorry”.

In 1993, another film, Baazigar featuring Shahrukh Khan became a major hit. In it Ajay the protagonist enacts a series of murders. In one scene, on the day Ajay takes his fiancé, Seema (played by Shilpa Shetty) to the office of registrar of marriage, he kills her by throwing her from the roof top of a tall building. What Baazigar showed was that in a cut-throat competition between two families there was no morality.

The killing sense of competition itself was the ultimate morality where self must triumph against all odds. One may read Ajay’s character as pathological. However, it is more appropriate to call it morphological and political. The 1990s marked the liberalisation of Indian economy as well as that realisation that India had arrived on the global scene. A sense of triumphalism was on the anvil.

The lover internalised the non-reciprocity from the woman or impossibility of being with her –often because of various social and communitarian divides. The male lover would thus turn away from the world, if not fully renounce it, or eventually destroy himself. The 1955 movie Devdas was the ultimate illustration of such a notion of love: unsuccessful in securing his love, Devdas the man left the world and drank himself to death. Many think that Guru Dutt (d. 1964), a noted film actor and director, lived such a tragic life that ended in the form of a suicide. The line between film as an art and society as a reality is so porous that it is difficult to say who mirrors whom.

It the old lyrical tradition of Bollywood actualisation of love was not immensely valued. Love ending in its possession was considered a failure much like in society too where it was rarely expressed in public, much less exhibited as a grand event. It was to be felt and sensed, not announced. This lyrical-literary tradition stemmed from the Urdu-Persian universe the love mythology of which – for instance, that of Leila and Majnoon – was all tragic ending in its non-actualisation.

With the release of Darr and Baazigar and their massive popularity all this changed significantly. Rahul ferociously showed the magnitude of intent and intensity of resolve to take to violence to secure his love. On silver screen Darr and Baazigar displayed, to the applause of the public, that there was hardly anything wrong if the path to love became drenched in blood. Darr was given several national awards.

Gender, terror and the state

Given that Indian society is still predominantly patriarchal, for a man like Akash in the real world or Rahul in the film, the desire or will of a woman –whether of Kiran in the film or Roshni in the real world –is irrelevant, if not entirely inconsequential. For a desire to be realizable it is sufficient that it is just manly –irrespective of its consequences to and endorsement by others. So after stabbing Sunil in his stomach twice Rahul laughs a devilish laugh to say: mardon wali bat – a manly act. It is not difficult to notice how manly violence and the sovereign violence of the state come almost face to face.

On a close reflection it becomes apparent that the killing of Roshni by Akash bears a link with the killing, on 9 February 2013, of the Kashmiri “terrorist” Mohammad Afzal (or Afzal Guru) by the Indian state. If Roshni’s refusal or non-compliance to Akash’s desire becomes the ground for her annihilation, likewise Afzal’s refusal to meet the desire of the Indian nation-state became the basis of his execution. Kashmir, from where Afzal came, has often been viewed in Indian films as no more than a place of beauty or just nature – features associated with women. That is, Kashmir is not a desiring subject but a desired object. One may point out that the attempted murder of Roshni was illegal whereas Afzal’s hanging was legal. The difference is only technical.

*Dr. Irfan Ahmad is Associate Professor of Political Anthropology at the Australian Catholic University, Melbourne, Australia. Earlier he has taught at the University of Amsterdam, Utrecht University, The Netherlands and Monash University, Australia.Cross posted via Aljazeera