Why I’m Voting Against Scottish Independence 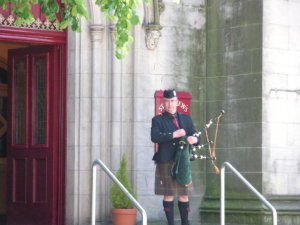 A man in traditional Scottish dress in Dundee. Photo by Mubashar Hasan

This is the first part of “The Nationalism Debate Series” and Politician’s Column. To learn more about Scottish independence  please click here

In September, Scotland will go to the polls to decide on its future. The question is a simple Yes or NO to separation from the United Kingdom. There are various parts to why I’m voting NO. Here, I‘m focusing on one of the major issues and how it affects so much. I know there are others which will sway people to either side but that’s the thing with this referendum. There will be those whose reasons will be mostly stats and figures, others will vote based mostly on what they feel; either way it will be their own.

The currency, a separate Scotland would use has been a prominent question since before the referendum was announced. There was at a point three options being discussed: Keeping the Pound (GBP), joining the Euro (EUR) or creating a new one.  These are essentially: create a currency or currency union.

The currency we use affects everything; this would have a major bearing on our interest rates, credit rating and our financial stability. If we created the Scottish Pound we would be using an untested currency whose value on the international market is unknown. This value, along with our rating would be created by the markets. As any person or new nation without a credit history knows, the rates you pay are much higher than those similar but with an established history. This would push up the cost of government borrowing at all levels, the cost of mortgages and the cost of living. One plus is that Scotland could change its interest rates to try matching its economic wishes.

The vastly supported option would be a currency union with the remainder of the UK (rUK). The thing that has been shown and is being played out across the Channel is that formal currency unions usually lead to banking unions and to work they need political union. Also with a currency union all of those involved need to agree on similar if not the same interest rates so that the currency is stable. The common issue, seen in the Eurozone, has been that the interest rates have been set to closer to the needs of the dominant members’ economy. In a GBP zone this could mean the rates being set by the Bank of England with its first thought to the larger rUK economy then the Scottish one.

The Yes campaign has said:

“all the necessary requirements for an optimal currency area are present, including similar levels of productivity and evidence of a high degree of convergence in terms of economic cycles”

Thus for a separate Scotland to have a strong, established currency that is relevant to its economy while used by its main export market it would be logical to continue using the GBP.

From reading the arguments from Yes for why Scotland and rUK should be in a currency union I’m reminded of why our union has lasted this long.

“there is a high degree of labour mobility across these islands, helped by transport links, culture and language”

There have been various unions throughout history. Some, including former British colonies, whose distance, industry and/or social make up has led to their leaders and/or vast majority of their citizens believing they would be better splitting from their current union. A more recent example is Czechoslovakia, an area joined in various ways until the 1992 election, when the elected parties’ views of how Czechoslovakia should stay joined differed so widely it tacitly suggested separation. After separating, they ended their currency union due to their differing speeds of economic reforms.

The vital mix of economy, interconnection, culture and language has been what has made our union so successful. These areas often interweave, strengthening and bolstering each other. Resources from one side of the border supply factories on the other to create goods that are advertised and sold in basically the same way across Britain.  There is even the case of the Yarrow shipyard, moved bricks and all, from London to Glasgow due to the need for extra room and the comparative price of land.

Business and government are able to look at resources across the whole of Britain without any real issues. We have the same currency, similar demands for goods and services and the same standards regulations. Why should we turn a simple internal market into an external one with potentially differing standards and regulations adding more costs on to businesses? This could also reduce trade between us and unintentionally weaken Scotland’s economy.

To me, with Yes’ Scotland being so close to rUK in so many economic and social ways this suggests at most a case for Devo max not independence. We would be changing so much just to stay essentially the same. If we were to split, with the economies continuing to being so similar and the currency and the culture, and the governments working together on so many fronts does it not present a case for not voting Yes?

Our country is linked in so many ways with the rest of the United Kingdom, as said by the Yes campaign. It’s why to most people splitting up the UK to have essentially what we already have seems so distant. The Yes campaign and the White Paper’s proposals would be like getting a divorce while still wanting to live in the same house, use the same bank account, go to the same places but do some things a bit differently. I firmly believe that by voting No, Scotland and the rest of the United Kingdom will be stronger and reach further than it would if we were to separate. Scotland has a vast future ahead of it but it will be a greater one as part of Great Britain.