Brisbane, December 14, 2014 (Alochonaa): After 9/11 the U.S. government captured terrorists, ‘enemy combatants’ in Afghanistan and, occasionally, some innocent bystanders during its retaliatory War on Terror. Those captives were taken to ‘black sites’, places free from those pesky legal protections and domestic civil rights legislation, and some were subjected to torture during ‘enhanced interrogations’. Now, after years of delays, a U.S. Senate report is out detailing what actually happened in those torture sessions and the recriminations have begun.

A map showing the majority of the known CIA Black Sites where prisoners were interrogated during the War of Terror. Source: TheHuffington Post

There are many basic questions the public and the U.S. Senate have desperately sought answers to. Was torture effective in eliciting information? Did it save lives? Was it legal? Under whose authority was it conducted? These are questions which lawyers, senators, executive officials, human rights advocates, presidents and vice-presidents have already debated at length and this report will just be one more nail in the coffin of the most controversial Bush-era program. In fact, besides some specific details of which particular techniques were used on which detainees, the report will probably not surprise anyone who has actually taken an interest in the CIA torture program as it has gradually come to light over the past 10 years.
Predictably, the report does not appear to have ushered in even a basic consensus on the importance or legitimacy of the torture program among partisans and program participants. Former vice-president Dick Cheney immediately called the report ‘full of crap’ and another so-called architect of the program essentially called it part of a political ‘food fight’. On the other hand, most Democrats, a few Republicans and a large number of left-leaning human rights organizations are jumping on the report as proof of an out of control executive agency, and critics of the Bush administration are having a field day. 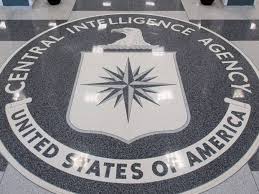 The CIA has predictably defended its role in the War of Terror. Source: Google Images

Of course, no one who thinks the CIA or executive branch has been overreaching in the War on Terror (including under Obama) needs this report to maintain the rage, nor will anyone who thinks the torture of terrorists is justified be persuaded otherwise by the report. Indeed, the very way the report is written is likely to prompt some very spirited defenses of the program. For instance, the report states that CIA torture elicited information from only 32 of 39 suspects and, therefore, was ineffective. Such a conclusion doesn’t sit well with people who are claiming it was the torture of one of those 32 which ultimately netted Bin Laden. At best, the new report’s Senate sponsorship will merely help to isolate defenders of the torture program and remind those thinking of instituting similar programs in the future that their deeds could come to light. The torture saga also provides us with a few lessons about America, international norms and the wider world.

Lesson 1 – Torture and International Norms
Lots of countries use torture because it works when used properly to gain a spurious confession (as done in many dictatorships for public consumption) or to elicit information about associates. It can also be used as part of a deterrent punishment, such as in a flogging or as part of an elaborate execution, such as stoning. Anyone who thinks torture doesn’t work is deluded as to why the intelligence operations of Stalin, the Nazis, Mao Zedong, the ancient Romans or Assyrians were so effective – they didn’t ask nicely. However, one of the obvious problems with torturing people for information is that you need to know who and what to ask. The detainee, for instance, might be an ignorant, illiterate Afghan peasant paid $5 dollars to deliver a few notes to members of the Taliban and torturing someone who knows nothing about their own employer will reveal nothing useful. 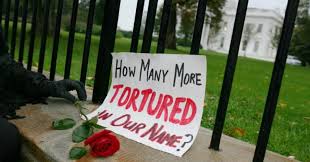 Not all Americans are sold on the government’s policies or the veracity of the report. This protest on the White House fence was made by Human Rights campaigner Anna White. Source: Google Images.

Consequently, torture carries a high risk that ignorant or innocent people may be tortured for nothing. And if someone is not telling me what I want to know the only way to be sure they actually don’t know anything is to torture them more. Torture for confessions or punishment, as well as for information, was common throughout the world until the 20th century when enfranchised publics began to seek protections from such horrors.
In post-9/11 America, the counter-terrorism hysteria appeared to provide an opening for rolling back definitions of torture and instigating targeted ‘enhanced interrogations’ for certain crimes, namely for foreign terrorists. Various legal arguments, executive privileges and territorial loopholes were used to justify torture and, for a time, the official view was that anti-terrorism’s importance meant torture was permissible. In fact, those with long enough memories will remember a time when U.S. officials, Bush included, denied that their ‘enhanced interrogations techniques’ were torture. Such an official view is now over and it shows the power of certain international norms in liberal-democratic countries. 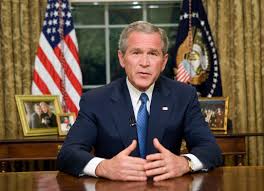 Many people are skeptical of the strength of international norms, and there are good reasons for this. Yet the anti-torture norm is so strong that even a powerful country like the USA had to use an army of lawyers and spokespeople to defend a tiny torture program, aimed at terrorists, using methods which would be considered soft in dozens of countries, and it still lost the argument. States with very poor human rights records, including Bush’s ‘Axis of Evil’, are lining up to complain about torture and reaffirm their distaste for the practice. Of course, their criticism is self-serving but informative – torture can be practiced from Africa to East Asia but never, ever admitted to or condoned. It is a strong norm.

Lesson 2 – Transparency Still Lacking
One of the key criticisms of Bush, Cheney and their torture programs was their secrecy. Senators and lawyers alike were routinely stymied by the executive branch in their efforts to gain information about the torture programs, particularly those happening at Guantanamo Bay. The departure of Bush and the beginning of the Obama administration was thought by some to be the time for the truth to come out. Obama promised to be the most transparent president in history only to continue the tradition of secrecy and ever-expanding executive privilege.

President Barack Obama; promised greater transparency in the War on Terror. So far the jury is still out on if he has delivered. Source: Associated Press.

Senators writing this torture report were denied thousands of documents and White House officials refused to answer their questions or even acknowledge them being asked. This led to a serious rift between the branches of government. This problem is not likely to go away. Anyone who thinks that executive office holders are simply going to reveal everything they and their predecessors do is seriously misguided. Obama is a president and, as such, he works atop of legal precedents, procedures and bureaucratic processes which have their own inertia and which are defended by entrenched bureaucratic and political operators.
Therefore, revealing the operations of the executive branch is a painful process but there are two sides to this lesson. Presidents certainly have a lot of power to prevent oversight and protect their program operators and vice versa, but with time, court action, motivated senators and mobilized public opinion the president’s veil of secrecy can be pierced. Whether doing so this time will have any effect beyond adding another dish to the political food fight remains to be seen.

*Dr. Simon Leitch is the Editor in Chief,  Foreign Policy and International Affairs, Alochonaa. He taught International Relations and Security Studies at Griffith University.  His research interests are in foreign policy and strategy with a particular interest in the interaction of the great powers.